The Icons in a Day

No matter how long or short your stay in Paris, there’s a shortlist of sights you absolutely should not miss. The Eiffel Tower of course tops that list, but pre-book your tickets if you’re planning to ride the elevators to the top. Many argue that the lower second level offers the best view of low-rise Paris, while some skip the ascent entirely. After all, this is the only view of Paris without the Eiffel Tower in it! From here, you’re in the perfect spot to hop aboard a Seine cruise, which takes you past the sights, museums, and monuments along the river, usually rounding Ile Saint-Louis before returning to dock.Eiffel Tower

The towers of Notre-Dame are another essential item on your Paris checklist. Due to the recent fire, it is closed but you you still view, intricate stone work, and gargoyles are more than worth the wait. While you’re on the Ile de la Cite, visit the lesser known Sainte Chapelle, and spend a half hour gawking at its incredible stained glass windows, which recount the stories of the Bible.

While you’re in the area, wander the historic Latin Quarter or Marais for a taste of Parisian street life, or pull up at a café and watch the world go by (it will mostly be tourists in this area, so choose your café with care). Alternatively, pick up some wine, cheese, and bread from a local store and take your impromptu picnic into Le Jardin du Luxembourg. In the early evening, take the metro up to the Arc de Triomphe, zip to the top (or climb if you’re masochistic), and watch the city of lights come alive piece by piece. Nowhere are those lights more impressive than along the Champs-Elysees. There is something absolutely magical about strolling down Paris’ most splendid boulevard, particularly at night.

Oh, the museums of Paris! Where do we even start? If you’re a super-keen art fan, it’s entirely possible to spend a week enjoying a Paris vacation and seeing nothing but museums. There’s The Louvre of course, but travellers continue to fiercely debate the value and strategies of a Louvre visit, particularly if you’re only in Paris for a short time. Since seeing it all in a day is practically impossible, you’ll need to prioritize. Some art lovers are horrified at the idea of visitors seeing the Mona Lisa and the Venus de Milo, then leaving. But realistically, such a route takes you by so much wonderful art, you may find it a handy and satisfying “quick summary” of the Louvre. For a less overwhelming art fix in a gorgeously re-purposed building, visit the Musee d’Orsay. This museum showcasing mainly French art from the 19th and early 20th centuries is highly recommended. You can see Cezanne, Monet, Manet, Degas, Renoir, Seurat, Gauguin, Van Gogh, and many others. While it’s much smaller than the Louvre, give yourself a good two to three hours to see the collection without burning out.

A directory of Paris’ museums would take up your entire vacation so here a a few to consider. Try to at least swing by the mind-boggling “inside out” building that is the Centre Pompidou, and if there’s time, visit the Musee National d’Art Moderne inside (hello Matisse, Kandinsky, Picasso, and Delaunay). Can’t get enough Picasso? Visit the nearby Musee National Picasso in the Marais. Musee D’Orsay left you inspired by Rodin? The Musee Rodin is just a short walk away. Try to go in nice weather, since the sculpture garden is a highlight. The Tuileries Gardens is also a major art hub, flanked by the Musee de l’Orangerie (two words: water lilies), and the Jeu de Paume photography museum.

The further you get from the Seine, the more likely you are to be in a former peripheral town that Paris eventually swallowed. Most famous of these is Montmartre. Yes, this area is home to the red light district, including the famous (and expensive) Moulin Rouge. But it has also been home to many of Paris’ most distinctive artistic voices over the years. Many Parisians shudder at the idea of lingering in the touristy Place du Tertre, but an hour or so here before watching sunset from the steps of the Sacre-Coeur is pure Paris magic. Just step away from the Place du Tetre when it’s time to eat. Montmartre is packed with too many wonderful family-run restaurants to wander into an easy tourist trap. Word to the wise? Try to approach Sacre-Coeur from Place du Tetre. Besides this option being easier on your legs, Square Louise Michel has an unfortunate reputation for touts and scam artists.

The Cimetiere du Pere Lachaise isn’t Paris’ largest cemetery, but it does contain its most famous graves and cenotaphs. These include Maria Callas, Moliere, Marcel Proust, Georges Bizet, Frederic Chopin, Edith Piaf, and a number of foreigners closely connected to Paris, including Jim Morrison and Oscar Wilde.

Paris’ most unusual and morbid attraction isn’t the cemetery however. That honour goes to the Paris Catacombs, one of the most popular attractions in the city. Entry queues in high season are notorious, to the point that these days, if the wait is longer than 20 minutes, visitors are given a coupon with a return time. The wait is well worth it, as this “Empire of the Dead” tells an important part of Paris’ story beyond mere grisly curiosity. The remains of 6-7 million people line the tunnels, only a fraction of which are open to the public. Over the years, urban explorers have also found everything from Nazi war bunkers to a fully equipped movie theatre, whose builders remain unknown.

To rejoin the living (sort of), step into the opulent Musee Grevin and admire lifelike wax recreations of many of France’s most famous faces. There’s a reason there’s no Madame Tussaud’s in Paris, despite Marie Tussaud having been French herself.

There’s no getting around it. Paris is expensive. Popular individual museums are a bargain at around 12 EUR, but there are so many of them, they can add up fast! Here are some easy, reliable ways to save money on your Paris vacation. 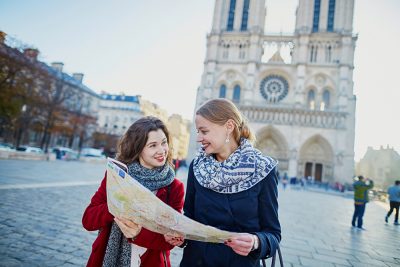 Tell friends you’re planning a Paris vacation, and this conversation will almost inevitably come up, “Oh, I love Paris, but the Parisians are so rude. They make fun of you if you don’t speak French,” and so on. Stereotypes about Parisian rudeness are dated, tired, and not at all a true reflection of the city. Be realistic. Paris may be “the city of love,” but it is also an economic and cultural powerhouse. Like locals in major world cities everywhere, Parisians are busy. Add in the crush of 16 million international visitors a year, most of whom don’t speak French, and tempers are going to fray, particularly in the high seasons of April/May and September/October. That shouldn’t deter you from going, but a little preparation can smooth the trip.

Obviously, simple manners make all the difference. Parisians value and respect quiet politeness, sincerity, and patience. Brush up on your basic French, particularly questions you’re likely to need as a tourist, and remember, Excusez moi Monsieur/Madame/Mademoiselle, parlez-vous anglais? is your faithful fallback. If you do get a brusque answer to a question, reply with a simple merci, and don’t take it personally.

Above is provided as information only and is not to be considered as recommendations by Travel Our Way Inc.